Grandmother Nadia Duvan is the last shaman and wisdom keeper of the Ulchi people. She was born in October 1950 in the village of Bulava, Ulchi territory, Russian Far East (southeastern Siberia), into a traditional Ulchi family. Her father, Dumbin Duvan, was born in 1876 and her mother, Goga, was born in 1902. Her father had two wives simultaneously (traditional arrangement in many Ulchi families) and her mother Goga was the second wife of the household. Her grandmother, from her fathers side, was a Manchu shaman, and her great grandfather, on her mothers side, was Sakin Kui, a shaman from the village of Auri, Ulchi territory. Ms. Duvan is a hereditary shaman. 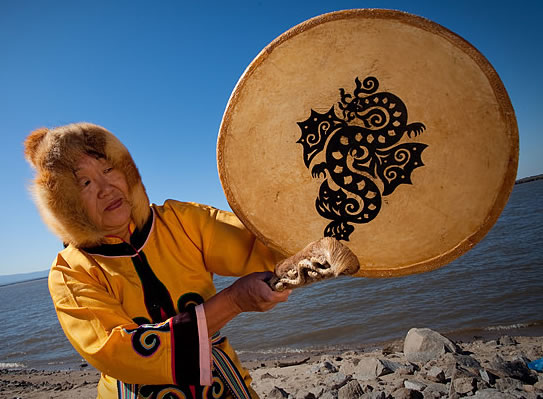 Grandmother Nadia Duvan, Bulava Village.
Grandmother Nadias first language is Ulchi (Manchu-Tungus dialect-Southern branch of the Altaic language group). When the gulags were emptied, the first Russians entered her village around 1967 or 1968. Bulava is a remote village along the Amur River region and could only be accessed by boat between the months of May-October. In the past twenty years, a logging-style road was constructed into the territory.

Stalins shaman purges/reign of terror in the 1930s did not have the same effect on the Ulchis as it had on many other indigenous peoples throughout Siberia. Shamanism continued to be practiced in secrecy. Their territory and small population, remote and far away from Moscow, did not warrant deep interest by the Soviet authorities. The census currently lists the Ulchi population at 2,500 in number.

During her childhood, Nadia was introduced to many notable shamans in her village. Her mother was a close friend and assistant to the Kasa shaman Altaka Olchi. Her family members, past and present, were also some of the main informants for the various Russian ethnographers and linguists who were researching shamanism and the language of the Ulchi.

After her Soviet studies in a one room school house in the village, Ms. Duvan was one of the first indigenous people allowed into the State sponsored Dance College in Birobidjan. After her graduation, she returned to her village to become the director of the state funded traditional dance and cultural group Giva. She was the director of this ensemble for over twenty-five years. Giva is a traditional Ulchi dance and ceremonial troupe, which tours various Russian venues, Italy, France, Germany, Japan, Norway, China, and the United States.

After the collapse of the Soviet Empire, Russians citizens were freely allowed to travel the world. In 1994, Ms. Duvan, along with various members of the Nanai tribe, came to the Pacific Northwest of the United States to teach and present their shamanic traditions. In 1995 she returned with Grandfather Misha Duvan to continue presentations, and in 1996 they gave a week long program for advanced students through the Foundation for Shamanic Studies.

In 1997, Grandmother Nadia returned to the United States, to continue her work. She has traveled to the Pacific Northwest each and every year since 1994. She brought Giva to the Seattle Opera House and taught at the Department of Ethnomusicology at the University of Washington. She lectured and performed at the Burke Museum and Brechemin Auditorium, University of Washington, Seattle campus, that same year.

In 1998, Ms. Duvan was invited to be a contributing author to the book First Fish, First People, Salmon Tales of the North Pacific Rim, University of Washington Press. This book was given an ABA award for best book under their category Before Columbus.

Her international work takes her throughout the world. She was the keynote speaker for the opening of the permanent collection of Manchu-Tungus tribes of the Russian Far East, National Museum of Ethnography, Osaka, Japan. She also continues to travel to Hokkaido Island being involved in projects with the Ainu peoples of this area. She travels to the United States each year to lecture and teach the fundamentals of classical shamanism to both academic institutions and venues open to the general public.

At home Grandmother Nadia continues to be involved with various indigenous rights programs that are funded through UNESCO and publishes articles on Ulchi shamanism through various Russian and Japanese ethnographic journals and magazines and lectures in various academic institutions and shamanic conferences held throughout the Russian Federation.