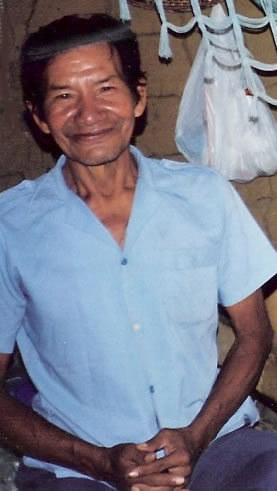 Manuel da Silva, or "Mandu" (Chief), is of the Hohodene phratry of the Aiary River, Northwest Amazon, Brazil. The Hohodene are one among five or six large phratries of the Baniwa, an Arawak-speaking people.

Mandu was born in 1930 at Uapui Rapids, on the Aiary River, the son of Seraphim and Nazaria, and grandson of Marcellino Euzebio, who founded the large village of Uapui. Mandu relates that when he was about 13 years of age, he, like so many other men and women of the Northwest Amazon region, left his home on various journeys to tap rubber in Colombia for three years. He returned to Uapui and married Flora de Lima, a woman of another phratry known as the Pleiades-grandchildren. Later, he returned to tap rubber in Colombia and Venezuela until he finally stopped working and returned home to stay in Uapui and start a family. In the 1950s, he and his younger brothers cleared the terrain of Uapui to make several smaller houses around the original longhouse of the founding family.

As a young man, Mandu suffered a very grave sickness, which had a profound effect on his life. He had been poisoned by witchcraft, and was practically making the last journey to the houses of the dead, when in his dream, he saw a master shaman and prophet coming to him and ordering his to go back: "Your time has not come. You cannot enter this house". His soul returned, he awoke and he was lying in his mother's arms. He asked her and his father for water, as he had been in coma for days.

It was from that time, that he and his parents decided that he should study to be a shaman. He studied with various masters, including the powerful shaman "Alejandro Dzauinaapi" in Colombia; "Kumadeiyon", in Venezuela; and Guilherme Garcia, Hohodene shaman and prophet of the upper Aiary - the most powerful until his death in 1974.

Mandu is considered by the native peoples of the entire region as being one of the last "true" jaguar-shamans alive. Mandu's correct title is "snuff-jaguar" (dzato dzauika). There are several types of shamans among the Baniwa, the most important is the "snuff-jaguar" of which he is the last.


At the end of the 1960s beginning of the 70s, when his uncle became too old to continue as chief of the village of Uapui, the post was transferred to Mandu who exercised his leadership ability with great skill and competence. For many years he was an outstanding orator and political leader. In 1989, he traveled to the town of San Carlos del Rio Negro, where a Venezuelan film-maker interviewed him for national television. The program was called "Las Advertencias del Mandu" (The Warnings of Mandu), in which he told about the serious problems in his community and among his people.

In 1997, he worked with Dr. Robin M. Wright in finalizing the book of Hohodene narratives called "The Wisdom of Our Ancestors." He now divides his time between his village of Uapui, where he is much sought out for his cures, and in the municipal capitol of Sao Gabriel da Cachoeira, where his daughter has a house, and he practices his cures amongst the native, mixed, and even white population of the city.