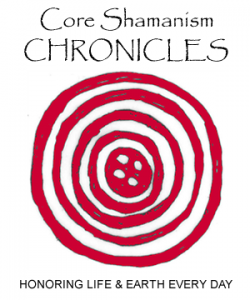 I am reclaiming my power.

Specifically, I am reclaiming Skunk power. I don’t think it ever left me, but when I was first given it, I didn’t know what to do. My life was in pieces and I was new to the world of spirits as shamanism understands it.

In my twenties I went through a three-year period I call my “Great Falling Apart.” I entered a period of extended dismemberment lasting several years. Spontaneous visions, periods of deep sleep and dreaming became common. My dream landscape expanded dramatically.

It was during one of these dreams that Skunk visited me, and in its way claimed me. At the time my understanding of Power Animals was in its infancy, and it would be many years before I had any real understanding of shamanism and dreams. I had no way to know what was happening to me, no real point of orientation.

I shifted from one dream to find myself standing on the front lawn of my childhood home. I felt a presence behind me and turned to see a skunk not ten feet away. Thinking I was sure to be sprayed I turned to run but I felt an invisible power coming from the skunk holding me in place and then throwing me face down on the ground. As I fell it sprayed me dead center on my back. This was no ordinary skunk spray. It did not smell or burn, though I was expecting it to. It sunk through my skin, into the muscles of my back and then deep into my center. It filled me in a way I had never felt before. Now I understand it to be a transfer of spiritual power.

I tried to get up but could not. I quickly lost consciousness, waking again in the dream world, on the same night but sitting in the back seat of a car driving up the coast road in Big Sur, California. A ghostly pale young man with black hair sat beside me. We were deep in discussion — he was intent on teaching me about how to work with my new power. It was then that I realized my companion was actually Skunk, the one who had sprayed me earlier. He had become human so I could speak with him more easily. He was kind but very serious. It was clear that he was the teacher and I the student, but thankfully he had an affectionate patience. Eventually I drifted off to the sound of our conversation, awakening in this ordinary reality.

I really didn’t know what to do with what had happened. The impact of his spray was so physically real I could feel it throughout my body after I awoke. It was so intense to be awake and feel that power in me, it was so tangible. Whatever had happened, it had become a part of me. I could remember some of what he’d told me, but I knew there was a lot more I couldn’t remember. Some part of me had absorbed it, but I couldn’t consciously access the knowledge. I was touched by the experience, but I don’t think I really understood its magnitude. I didn’t know that animals many of us consider to be as humble as skunks could be important Power Animals. I certainly didn’t understand that helping spirits could visit you spontaneously in your dreams and convey power to you without any effort or intention on your part. Most of all I didn’t really understand the nature of the power I was given, and the many ways in which it could change my life.

I eventually found a well-trained practitioner of Core Shamanism healing techniques to work with. Over several years she performed healings on me that helped me put my life back together, as well as introducing me to the FSS curriculum. As I took various FSS courses and practiced passionately on my own, my waking visions and spiritual visitations subsided. By journeying to the spirits regularly, intentionally, I was able to turn down the volume on the chaotic experiences I was having. My sleep was less disturbed and I was eventually able to rejoin the ordinary world and begin to build a life for myself. But I never returned to that specific dream to fully understand or integrate Skunk power until recently.

In all of my decades of training and practice Skunk never showed up in my journeys, never presented itself as a Power Animal to work with for soul retrieval, psychopomp or other shamanic work. My shamanic practice was always full of participation from various spirits, and my life grew to include a day job and a very fulfilling family life. I wonder if I would have been as willing to let that experience fade if it had been Bear or Eagle or Panther who had so clearly given me power? I must assume that some part of me has felt reluctant to explore more deeply the power that Skunk transferred to me because, well, it came from a skunk!

This reluctance is not something I’m proud of. I believe biases like that are ultimately childish and based in ignorance. In nature skunks must be considered to be very powerful; most animals give them a wide berth. And clearly the spiritual power a helping spirit conveys has little to do with its physical size. Mouse, Lion, Elephant or Dragonfly, it must be acknowledged that all have the ability to radically transform our experience of being alive. Each gift of power from the spirits can convey tremendous healing and transformation.

Years later I am reclaiming Skunk, using the many tools I’ve been trained to work with over the years. My first step is just to honor the Skunk at my altar and with a pendant I wear. Both are ways not only to signal to Skunk that I’m showing up, but also to bring my awareness of its gift into my daily life. I have also shifted my morning practice of raising power and connecting with the spirits to focus on Skunk. Moving slowly, I welcome Skunk’s power forward into my awareness, remembering the feeling of its power seeping into me. As that power grows in me, I welcome it gratefully, with an open heart. It’s been my experience that in shamanism we ultimately integrate power we are given through our hearts, and that works best with a sense of gratitude. Then, of course there is journeying.

I felt that attempting to journey directly to Skunk, because so much time had passed, was not the best approach. Instead, I journeyed to a Power Animal I’ve been working closely with for the last three or four years. This spirit was able to walk me through all that I had been gifted by Skunk’s power. The most important gift was a deep feeling of safety, even through the feeling in the dream had been one of the most frightening experiences of my life. Skunk’s power had given me a sureness, a relaxed calm that was with me even when fear was a constant in my life. I could sense how the skunk can sit easily in its own power and ward off danger simply through its own presence. Next, I was shown that Skunk energy helped me balance my head and heart, ensuring that they worked together. Finally, I was shown that Skunk taught me to enjoy life and be playful. This is something my helping spirits have been calling on me to cultivate for the last several years as I have become a single father.

Now I can feel Skunk with me, and I can feel the strength I gain by engaging its presence. I am more confident calling on that power when I’m with others, exploring how people respond differently to me when I sink into the feeling of its presence. It feels like the more I call on it, the more I work with it through life’s challenges, the stronger in me it becomes.

In the morning, when I dance to raise power, I feel Skunk right there, ready and willing to join with me. I understand its power is in me, that we are connected through that gift. As I dance it, the power grows and I am filled with gratitude at having Skunk with me so powerfully in life.